Each week I post here a chapter from The KUJI Handbook. For more information about the book, see the description at the end of this article.

Here I recount the story behind how – and why – I left legal practice and established the Meisterline Research Lab, where we developed the world’s first science-based system for measuring the expertise of lawyers: The KUJI Rating Scale.

Why did I leave a senior position at an international law firm to become a cognitive scientist? What were the childhood experiences and life lessons about wasted talent, that led to this major career change? And how has this decision transformed how we assess legal experts today?

If there was a single moment, I’d say it all started the day that I walked out of my law firm’s offices for the last time, leaving behind the life of a corporate lawyer to discover for myself how experts think. That was back in December 2006.

At that time, I was the Head of Competition Law at an international law firm in Hong Kong, and I was leaving that prestigious role to take up a research scholarship at one of Australia’s oldest universities.

All my life I’d been fascinated with experts and expertise, and after a successful career in law I was ready to follow through on my next calling, which I discovered traced all the way back to my childhood.

Growing up on a farm in northern Tasmania, I was constantly around incredible farmers and tradespeople of whom I was completely in awe.

As a 10-year-old, all I wanted to be was a Kung Fu master, just like my hero Bruce Lee. I’ve often wondered whether living in Hong Kong for 15 years was the fulfillment of a subconscious desire ingrained from watching his movies.

As a teenager, I’d practice my drums for hours every day, because all I wanted to be was an elite, professional musician. And no-one was better than the New York studio drummer, Steve Gadd, whom I still think is the ultimate master of the instrument.

And, of course, I eventually became a specialist in competition law, working alongside some of the brightest legal minds in the world, which was by far the best part of my job.

I’d always been fascinated with experts and always felt very comfortable being around them. I was also incredibly curious about what was different about them. How do they see things differently from merely competent professionals? What do their decision-making processes involve? How do their cognitive skills and abilities change over time?

Yet these weren’t the only, or even the most important, factors behind my decision to swap my practising certificate as a lawyer for the life of a cognitive scientist.

While I was growing up and throughout my career as a lawyer, I’d seen countless examples of wasted talent, and it always deeply distressed me. The most heartbreaking were those individuals who were incredibly gifted and who worked hard to realise their potential, but they were held back because of a lack of opportunity or resources, or because they faced prejudice and discrimination.

I still remember many occasions in my late teens and early twenties when I bought musical instruments and equipment, like a portable keyboard or a second-hand amplifier, to give to gifted musicians who didn’t have the means to buy them for themselves. I even gave away my own beloved 6-piece Pearl drum set in Gunmetal Blue to a friend who was far more talented than me, but who came from very difficult circumstances.

It was not only very difficult to watch people struggling against the disadvantages they faced. I genuinely believed – and I still do – that people with special talent and a willingness to work hard (whoever and wherever they are) deserve to get the recognition and support they need to have fulfilling lives and contribute to society.

So I was always looking for a way to ensure that people with real talent would no longer be overlooked, ignored or held back. And I saw an opportunity to level the playing field with objective and impartial science. This is ultimately why I left legal practice on a mission to become an expert on experts.

Within a few years of leaving legal practice, I had completed one of the largest empirical studies of its kind involving world-class lawyers. This research formed the basis of my PhD.

Although I hadn’t planned it, I’d also pioneered a new field of academic research focused on the cognitive development of legal expertise. This led me to write my book, Unlocking the Secrets of Legal Genius, which I completed in 2015.

I then moved to London and established the Meisterline Research Lab, where we do applied research on professional experts around the world.

It was there at the Lab that we finished work on the world’s first science-based system for measuring professional expertise. That system is what we know today as the KUJI Rating Scale.

I’d been working on the concepts behind KUJI Ratings for over a decade, with help from academic researchers, software engineers and a former NASA scientist. And between 2016 and 2018 we fine-tuned the whole system on lawyers from over 100 of the world’s leading law firms.

KUJI is an acronym of “Knowledge, Understanding, Judgment and Intuition.” You can think of these as the four critical dimensions of professional expertise. Without having developed each of these skills, you really can’t call yourself an expert.

KUJI Ratings are very effective for identifying whether someone is a Novice, or an Expert or a Master in a particular area of law. What they don’t measure are things like IQ, Emotional Intelligence, personality type or any of the other so-called “soft skills,” or at least they don’t measure them directly.

We do know that these softer skills are important factors influencing the development of the skills that we do measure. But our focus is on an individual’s abilities at the cognitive level. In other words, we assess how they think. Because at the end of the day, that’s what clients are ultimately paying for.

The KUJI Handbook is an essential primer for law firm leaders and clients who rely on legal experts. It covers all the core concepts underlying KUJI Ratings and the KUJI Rating Scale, including: The science behind this new standard for measuring legal expertise; what “KUJI” actually means; the practicalities of assessing the expertise of individual lawyers; the cognitive significance of being located within a specific KUJI Band; and, case studies that show how quantifying the expertise of lawyers can lead to more efficient lawyer pricing, measurable improvements in lawyer diversity, a better understanding of position titles in law firms, and invaluable benchmarking data across a wide range of legal service providers.

Peter Macmillan is one of the world’s leading authorities on the cognitive development of professional expertise. A former lawyer, he is Founder and CEO of Meisterline Analytics, creator of the KUJI® Rating System, and author of The KUJI Handbook and Unlocking the Secrets of Legal Genius: Measuring Specialist Legal Expertise Through Think-Aloud Verbal Protocol Analysis. Peter began his legal career as a Competition Law specialist in 1992. He went on to work for major corporate law firms and government authorities in both Australia and Hong Kong. In 2006, Peter resigned as Head of Competition Law at an international law firm and went on to complete a PhD in law and cognitive science. Then with the help of researchers, coding engineers and an ex-NASA scientist, he established the Meisterline Analytics Research Lab, which in 2016 launched the world’s first science-based rating system for independently and objectively measuring the expertise of lawyers. 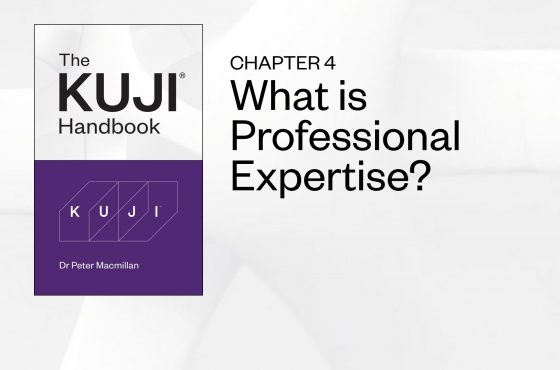 CHAPTER 4 - WHAT IS PROFESSIONAL EXPERTISE? 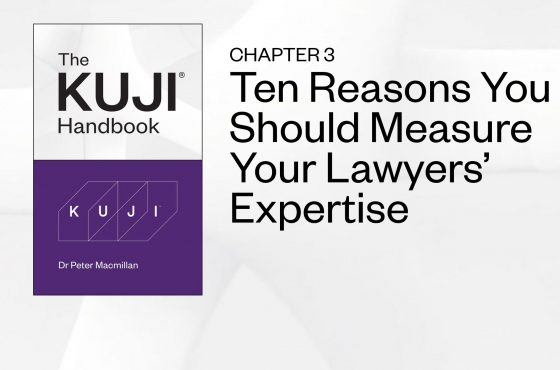 CHAPTER 3 - TEN REASONS YOU SHOULD MEASURE YOUR LAWYERS' EXPERTISE 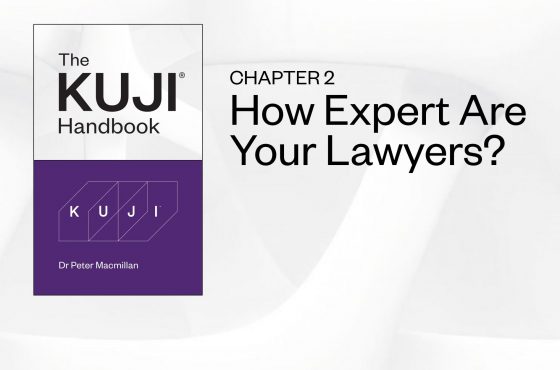 CHAPTER 2 - HOW EXPERT ARE YOUR LAWYERS?